Please see below for some of the more commonly asked questions.
If you need more information please call or email us.

What size are my tyres?

There are several ways of contacting us - either by phone, fax, or email. All details are located at the bottom of the page Or if you prefer, you can fill out our Contact Form.

What are your opening hours?

What do you offer on tyres?

We do not sell tyres over this website, however we do have a great range of rim and tyre packages available for your car in-store. If you would like to purchase tyres only, please contact us to find out who your local tyre dealer is.

What does the "Offset" mean?

The offset of a vehicle's wheel is the distance between the centreline of the wheel and the plane of the hub-mounting surface of the wheel. It can thus be either positive or negative, and is typically measured in millimetres.

Offset has a significant effect on many elements of a vehicle's suspension, including suspension geometry, clearance between the tyre and suspension elements, the scrub radius of the steering system, and visually, the width of the wheel face relative to the car's bodywork."Deep dish" wheels typically have negative offset or a very low positive offset. Wheels are usually stamped with their offset using the German prefix "ET", meaning "Einpresstiefe" or, literally, "press depth". An example would be "ET45" for a 45mm offset. 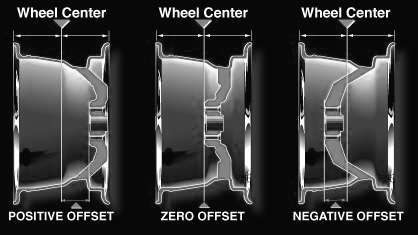